Home » About Us » The Journey to Safety Part 3: How Credible is Your Fear?

The Journey to Safety Part 3: How Credible is Your Fear? 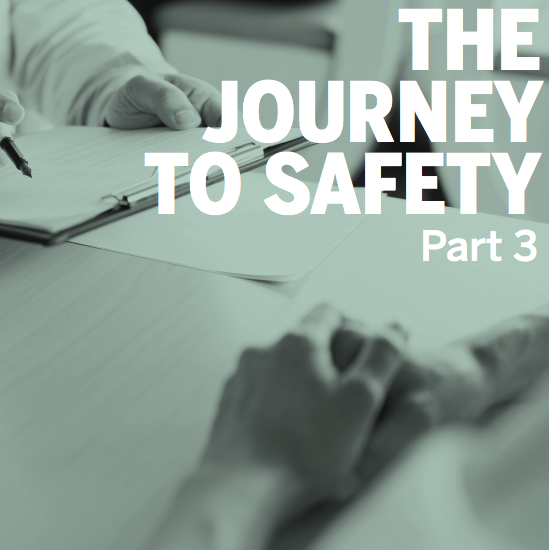 Ana Hernández is a Master student in Social Work and Latin American Studies. She is a Research Assistant at the Texas Institute for Child and Family Wellbeing.  Ana co-facilitates a weekly support group at the Hutto Detention Center and is part of the Social Work Detention Response Team that provides legal information for women and children detained at Karnes Detention Center.

This is part three of “The Journey to Safety” blog series which aims to tell the stories of Central American women who are seeking asylum and are now in detention in the U.S.; Read Part 1 here and Part 2 here.

Each day when individuals or families arrive at the US border seeking asylum, they first have to convince a border patrol agent or ICE Officer that something so bad has happened to them that they cannot return home.  Most of the time, this means a woman is telling someone she just met and needs help from about the most intimate, horrifying details of her life. If this stranger believes her, she will be detained and within a week, she will have to prove to a different immigration officer that her fear is credible.

Our asylum system is entirely based on an individual having had something awful happen to them. If that individual can show that she has “credible fear,” she cannot be deported from the United States until her asylum case is processed. An immigration officer has to hear that the woman is a victim; that she cannot get help from her government; and that she cannot move to another part of her country.

What all this means is that a woman must sit through a roughly three-hour interview where she tells her story through an interpreter.  If she has children over 12, they will likely be asked to participate as well. Our legal system expects immigrant women to navigate this system without any training or any legal assistance – because unlike citizens of this country, immigrants do not have the right to free legal counsel.

From a therapeutic perspective, it is incredibly problematic to prove that fear is credible. Fear is the body’s response to a threatening situation. It can manifest in many different ways, including crying, shaking, dissociating, and laughing. That last one is important. A colleague of mine helping as an expert witness in immigration court once described a case in which the woman was seen as less credible because she laughed as she told her history of trauma. Many officers in our immigration system have never been trained on trauma and are likely not looking for laughter, or other less common-sense symptoms, as signs of fear.

The word credible is more complicated – it implies that someone can be trusted and is telling the truth. Given that the Credible Fear interview does not require physical evidence, but rather relies entirely on the woman’s story, the “credibility” is generally assessed by the details of the story and the symptoms of fear that are presented. You can see how this circular logic easily becomes faulty and places an unreasonable burden on the woman to prove her level of fear.

Victims of trauma often cannot recount their stories in a linear way.  It’s just too much for a body and mind to recount every detail of every rape, threat, and beating.  However, in the context of a credible fear interview, this may be viewed as lying or deceptive behavior.  Several women I have worked with have not passed a credible interview because they did not disclose a severe sexual assault because their children were present or because they were ashamed.

Any therapist who works with people who have experienced trauma will tell you that the absolute worst thing you can do for someone who has a history of trauma is to ask them to talk about all of it at once. This is why I see so many women dissociate, break down crying or talk about having other symptoms of PTSD when I meet them at Karnes and Hutto.

Not only have we set up a complicated system that is hard to navigate,  we have created a system that is inherently re-traumatizing women and children by forcing them to relive the worst moments of their lives in order to not be deported. In my next blog, I will discuss the ways in which the detention center setting itself is also set up to be re-traumatizing.

To learn more about organizations that help support migrants navigating this legal system, look into: