Home » About Us » “Making it their own”: Supervising the Implementation of EBPs in Clinical Practice

“Making it their own”: Supervising the Implementation of EBPs in Clinical Practice 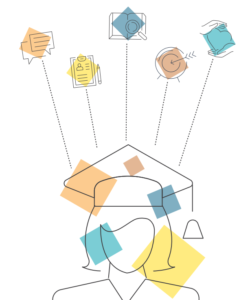 TXICFW: Thanks so much for taking the time to chat with us about supervising and EBPs. What experience do you have supervising students, interns, or new employees under Evidence-based Programs and Evidence-based Practices? How would you explain the difference between the two?

TXICFW: What do interns generally struggle with when working under an EBP for the first time? Can you give an example? And what techniques have been useful in helping them to adapt to the structure of EBPs?

Rob: When developing Action Plans [an Evidence Based Practice], interns often struggle initially to distinguish between client hopes/expectations, goals and action steps. I train them to think of hopes/expectations as what the client would like to see change by the end of treatment, SMART goals as the means for getting there and action steps as supports to goals being achieved, or ways of removing obstacles to goals being achieved. Interns have reported finding role playing these conversations with me very helpful as part of training.

TXICFW: In your experience, are interns more likely to be overly-rigid or overly-flexible in their implementation of EBPs?

Rob: I think the answer to this question depends in part on the interns’ personalities. Some interns are very detail-oriented and want to follow instructions “to the T”, while others prefer being more flexible and creative. It is also important to note that, because we utilize Evidence-Based Practices that require a degree of structure, we try to select interns with that attention to detail, organization and follow-through as part of their professional repertoire.

TXICFW: Have you encountered a situation in which an EBP would recommend one course of action in a particular case, but you feel another would be more appropriate? How would you recommend a supervisor handle that situation? 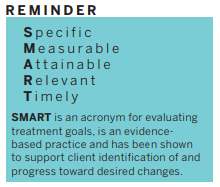 Rob: While I recognize the value of EBPs, I also recognize that clinical work is ultimately about the relationship between the clinician and the client, and meeting the client where (s)he is. I would probably try to nudge the client closer to the recommended course of action, but if the client felt strongly that (s)he wanted to do something different, I would respect that. Sometimes, after clients develop SMART goals, they modify the goal on their own between appointments. While this sometimes results in the goal no longer meeting the criteria to be a SMART goal, it is also an instance of clients “making it their own.” This often results in a higher level of success than if the client had conformed to the original goal, and I applaud clients for taking ownership for their growth in this way.

TXICFW: What is the hardest part of supervising interns working under an EBP? How do EBPs make your work as a supervisor easier?

Rob: Hardest: helping them “get” the formula for a SMART goal. Easier: knowing the students have a template they can rely on to develop useful goals.

TXICFW: Are interns generally aware of and comfortable with the reason (i.e., contract mandates, etc…) for implementing EBPs? Do they understand what makes EBPs ‘special’?

Rob: Students today are generally much more aware of EBPs than they were in years past, and they typically understand both why they exist and why they are helpful. There seems to be a parallel trend between the increasing requirement of the use of EBPs and students’ education around EBPs.

TXICFW: What should EBP creators understand about supervisors that are trying to train interns in their program/curriculum?

Rob: It is helpful for EBP creators to keep in mind that supervisors are training interns in all aspects of providing counseling. As license holders, supervisors are the gatekeepers of their disciplines and are ultimately responsible for their students’ caseload. Most interns have limited or no clinical experience prior to their internships. They are naturally anxious to learn agency and program policies and procedures, the program’s clinical model and how to form therapeutic relationships with their clients. Supervisors are training the “whole” intern, and addressing both hard and soft skills.

TXICFW: What is the most important thing for a supervisor to remember when they are training an intern under an EBP?

Rob: The more interns can observe and practice EBP skills before seeing clients and the more they are encouraged to “make it their own,” i.e. “develop their own style in practicing the skills,” the easier it will be for them to work successfully with clients.