Home » About Us » Point fingers at the federal government for separating children, not non-profits

Point fingers at the federal government for separating children, not non-profits 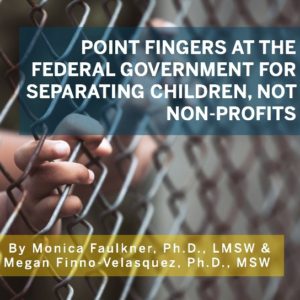 Government sanctioned separation of families at our southern border finally sparked collective outrage about the treatment of families seeking asylum in the U.S.  But now we have a new problem. Some are villainizing non-profits who have been serving immigrant families for decades. This is a mistake. These non-profits need support now more than ever.

Unfortunately, negative media attention and misperceptions have embattled non-profits.  The media frequently shows pictures of tent facilities or children in “cages.” Tent facilities are opened quickly on an adhoc basis when influxes of migration surpass the capacity of the regularly operated shelters. They are absolutely not where children should live, but the alternative right now would be children continuing to live at holding facilities. Politicians have recently visited federal holding facilities on the border and expressed outrage about the cages and the aluminum blankets. However, the cages are not used on an ad hoc basis. They have been there long before this crisis.  In fact, immigrants call them “la perrera” or dog pound. The aluminum blankets are definitely unappealing, but they serve a purpose- they prevent lice from spreading and they are warm.

Another misconception is that non-profits are keeping children out of view of the public to prevent us from seeing what’s happening to them. Keeping children out of view is actually in their best interest.  Sticking cameras over fences or camping out in front of non-profits is not okay.  Children are scared and traumatized already. Loud noises, crowds of people, and flashing lights only makes it worse for them.

Both immigration and child welfare systems are incredibly complex, and clarifying distinctions between them is crucial for several reasons. Children seen on television are not going into state foster care systems due to abuse or neglect and they will not be eligible for adoption. These children have parents and family. They are not legal orphans eligible for adoption. Some of the youngest ones, and those with special needs, may be placed in foster homes temporarily. The confusion arises because sometimes non-profit foster care agencies are licensed to care for immigrant children in federal care as well as children in state child welfare custody. But the laws and processes for these two systems is very different.  After the U.S. government ensures that immigrant children have safe, non-exploitive family members to care for them, there is no reason for them to remain in shelter or foster care.

Well-meaning people will often show up in crises to save children, in this case, wanting to give them hugs and teddy bears and even adopt them. But that positive energy should be directed towards supporting the non-profits that almost always need help with donations and supplies to keep their operations running.  They do get paid for the basic care of children, but there is an incredible amount of need. Right now many of these non-profits are scrambling to help released parents and children with housing and transportation to their destination while they await immigration hearings. Children may cross the border with only a backpack. They need clothes, healthcare and mental health services, but they do not need a mother or father.  They already have that.

The U.S. government took children from parents who were desperately trying to protect them from very real dangers in their home countries. Any social service provider, had they been listened to, would have warned of the chaos that would come from using children as bargaining tools in immigration. Now, we have a mess of human rights violations, traumatized families, non-profits who are struggling to fulfill their missions of helping children and frankly, it’s a shame that we live in a country where this happened. There was no clear plan and the situation is changing every day. However, the only humane solution is for the U.S. government to not only reunite families, but provide long-term resources the Office of Refugee Resettlement and to non-profits around the country to help children and their families heal from the horrific experience of detention and separation and resettle in the U.S.  We all should focus efforts on supporting non-profits and demanding action from the US government.

Monica Faulkner, Ph.D., LMSW is an Associate Research Professor at the Steve Hicks School of Social Work at The University of Texas at Austin and Director of the Texas Institute for Child and Family Wellbeing. She is a Research Affiliate of the Center for Immigration and Child Welfare.

Megan Finno-Velasquez, Ph.D., LMSW is an Assistant Professor at the School of Social at New Mexico State University and the Director of the Center on Immigration and Child Welfare.

This op-ed originally appeared in the Austin American Statesman on 8/2/18.