Home » About Us » Blogs » Op-ed: Separating children and moms will not curb unauthorized entry into the U.S.

Op-ed: Separating children and moms will not curb unauthorized entry into the U.S. 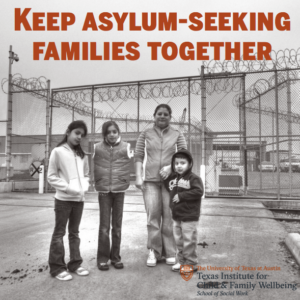 Recent news reports have indicated that the U.S. Department of Homeland Security is considering causing children psychological harm as a strategy to curb illegal immigration from Central America. It is contemplating separating mothers and children who cross the border without authorization. Regardless of whether this practice becomes official policy, it is already happening in Texas, and it is not deterring women from escaping violence in their home countries.

Texas immigration advocates have recently noted cases of mothers who have had their children sent to detention facilities 300 miles away from them. Even though family detention centers have had capacity for more families, children are being taken from their mothers at the border and bused to different locations. Mothers have no means of contacting their children or knowing they are safe. It has been a common practice to not house adolescent males in family detention once they reach 16. However, much younger children are being separated from their mothers.

Central American women’s motivations to migrate are often tied to poverty, violence and persecution in their home countries. Crossing the border is often a decision of last resort as they search of safety and refuge.

The journey and potential detention in America may still be a safer option even if there is potential for detention and separation from a child. As one woman told us, “I die here or I take my chances and maybe die on the way.”

As social workers, we have worked with women in these situations. We have heard consistent themes in their stories of rape, severe domestic violence, threats from gangs, human trafficking and lack of police protection. When murders of women are not investigated and when bodies are left in streets in their home countries, there is a clear message that women’s lives do not matter.

As parents ourselves, we acknowledge that separation and psychological harm to our children is something we would avoid at all costs. Thus, we appreciate the urgency with which many immigrant parents seek the safety and protection of their children when faced with violence and persecution.

As researchers, we also understand that the criminalization of immigrant mothers comes with a price — a price that will largely be paid by children. Separating children from their mothers erodes mental health and disrupts attachment, dynamics that may persist even after families are reunified. Even when families are not separated, the pervasive fear of such an event carries damaging consequences.

Regardless of the lens one might use to consider immigration policy, separating mothers from their children is inhumane and has not, and will not, deter unauthorized entry into our country. Women coming from Central America have more to fear in their own countries than they do here.

When choices are so constrained that mothers must choose between certain death or separation from children for a temporary period, mothers often choose separation because at least they will still be alive to fight for their children. Ripping children from their mothers’ arms and sending them to separate detention facilities is not a deterrent. There is simply no other rational reason to implement such a policy.

We must resist the notion that a humane response is not feasible. Rather, we have both the know-how and the responsibility to keep families together and to offer a comprehensive, trauma-informed response to those seeking asylum in the United States.

Women and their children should be released to the community together, where they can proceed with the process of applying for asylum without having taxpayers foot the bill for detaining them and without forcing children to experience harm.

Monica Faulkner is director of the Texas Institute for Family and Child Wellbeing at The University of Texas at Austin. Laurie Cook Heffron is an assistant professor of social work at St. Edward’s University. Emails: mfaulkner@mail.utexas.edu, lheffron@stedwards.edu

Originally published in The Dallas Morning News and The Rio Grande Guardian.